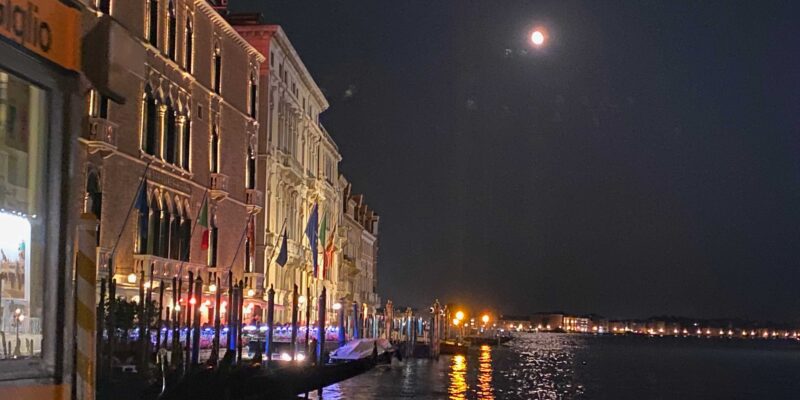 or How Did I End Up Here?

Venice is a city unlike any other. All cities have their unique identities, but mostly they are variations on a theme. Most cities have entire neighborhoods that you could transplant into another city with no changes. At no point in my rambles did I ever feel like I could be anywhere else but in Venice. And I almost didn’t go. As a child, I dreamt of visiting Venice, but in the last decade or so, I took it off my “must see” list. Pictures of the cruise ships and the crowds convinced me that the experience wouldn’t live up to my dreams.

For the last 5 years, my plan had been that once Buster passed away, I would go to Chiang Mai, Thailand, for a year. This has been my grief therapy plan since his pancreas first tried to kill him back in 2017. When he shuffled off his mortal coil in May, Thailand wasn’t a good option. My old boss at Edge of the World Tours in San Francisco invited me to return and spend the summer giving wine tours in Sonoma Valley. In three months, I earned enough money to pay off the credit card debt I gained in Buster’s last days, plus enough to finance a modest trip around the world for the next 8 months. It also gave me a chance to figure out where to go next.

Where Would You Go, If You Could Go Anywhere?

It was tough deciding where to go first when I had the entire world to choose from. It was tougher with COVID constantly closing down locations, and which countries you could travel to and from. A problem likely to hound vagabonds for years. My plans changed many times during the summer. Not surprising to those who know me. I think the only reason I like to plan is so I have something to change.

For a fair amount of time, I planned on spending 3 days in Venice, 3 days in Florence, and 3 days in Rome. I came up with this idea after watching 2 of my favorite travel vloggers, Kara and Nate, return to Rome in July. They contrasted that with their experience visiting in 2017, when the line into the Coliseum was 3 hours long. This time, they walked right in. The city was practically empty compared to recent years. That’s what got me thinking that now might be the ideal time to visit Italy. I decided to stick with a week in Venice rather than running all over so that I could really appreciate my time there. I’m so happy I made that choice.

My time in Venice touched me profoundly. I haven’t been in a place that felt like home in years. I fell deeply in love with Venice and I wanted to stay there forever. Which would end the ramble-my-way-around-the-world plan. Lucky for me, I’m poor. I moved on, planning on taking trains from Venice to Istanbul, with stops in Bolzano and Vienna to visit friends.

If (when?) I decide to settle in Venice, I will have to get my gemstone carving workshop set up again. For almost 20 years, my business was carving emerald, sapphire, jade, and rock crystal. The designs that resonate most in my soul are Celtic and heraldic designs. One of my favorite pieces is a quartz crystal in which I carved the Lion of St. Mark from the Book of Kells. This is the symbol of Venice. I can just see myself carving a whole series based on these designs.

While I don’t see myself settling down soon, on the trains from Venice to Bolzano, I came up with several ideas about how I could carve gemstones while living out of a suitcase and traipsing around the world. Doing so will require some setup, but I’ve taken the first steps already. It could happen. I’m exciting by the prospect.

I left my stuff in San Francisco, but I left my heart in Venice –

Venice. La Serenissima. The gateway of the Renaissance. The folks who invented Quarantine. I will be forever grateful that when I finally set off to see the world, my first stop was Venice. She was more than I dreamed, and a classic example that the world is a bigger place than you can imagine.

Far From the Madding Crowd.

I booked my Airbnb in Venice based on the fact that it had a bathtub (I’ve been living in drought country for years), it was an attic room with a lovely odd window, there was a rooftop terrace, and it seemed to be on the other side of Venice from St. Mark’s Square. It turns out it is in the Cannaregio Sieste in the northwest corner of Venice. This really is away from the main tourist areas. I loved that many of the local shop workers didn’t speak English (or at least wouldn’t admit it). At 8:00 in the morning, the streets were still practically deserted. It was heavenly. This is also where I learned that in Venice it’s not a matter of how far away something is, it’s all about how many bridges are between here and there.

When the Moon Hits Your Eye…That’s Amore.

Not for me, alas. One of the traditions I quickly developed was going to Piazza San Marco at 10:30 each night and getting a table and a glass of wine at Caffe Florian (est. 1720) to listen to their wonderful band. Stand-up bass, piano, violin, and accordion. My kind of music. At midnight on my first night, a fellow not far from me dropped to his knee and pulled out a ring case. I tried to dig out my camera, but she had squealed and thrown her arms around him long before I brought it to hand. Once the applause died down I approached them and mentioned that if they wanted to do that again, I would take pictures for them. He was particularly grateful since that was the one aspect he couldn’t figure out. I feel so blessed that I could help these folks share their incredible moment with their family and friends. I told them both I really liked his style.

Gondolas for the Win

In my exhaustive research of what to do and not do in Venice, I repeatedly came across the suggestion not to take a gondola ride. They are expensive. About $80 during the day, $100 at night, and more if you want the gondolier to sing. I admit that one of the reasons I signed up for a “Wine and Tapas Tour” was with the hope that I might make some friends who would be willing to share the expense. No such luck. There were 2 couples with me, newlyweds and anniversary celebrants, and they did their best to include me, but I was definitely a fifth wheel. Luckily the main reason I signed up was the food and wine, and that was fantastic. I learned to order “dame na ombra” – a small glass filled to the brim with the house wine.

My favorite activity in Venice was signing up for the 1-hour touristy group gondola tour for $33. Yes, they put me in a gondola with 4 other folks I didn’t know. But come on folks – it’s Venice! Nothing says “Venice” like gondolas. More importantly, traveling through the back alleys by gondola is the only way to experience them. Living the history and culture of these craftsmen was as epic as Venice is herself.

We use cookies on our website to give you the most relevant experience by remembering your preferences and repeat visits. Read More By clicking “Accept All”, you consent to the use of ALL the cookies. However, you may visit "Cookie Settings" to provide a controlled consent.
Cookie SettingsAccept All
Manage consent

This website uses cookies to improve your experience while you navigate through the website. Out of these, the cookies that are categorized as necessary are stored on your browser as they are essential for the working of basic functionalities of the website. We also use third-party cookies that help us analyze and understand how you use this website. These cookies will be stored in your browser only with your consent. You also have the option to opt-out of these cookies. But opting out of some of these cookies may affect your browsing experience.
Necessary Always Enabled
Necessary cookies are absolutely essential for the website to function properly. These cookies ensure basic functionalities and security features of the website, anonymously.
Functional
Functional cookies help to perform certain functionalities like sharing the content of the website on social media platforms, collect feedbacks, and other third-party features.
Performance
Performance cookies are used to understand and analyze the key performance indexes of the website which helps in delivering a better user experience for the visitors.
Analytics
Analytical cookies are used to understand how visitors interact with the website. These cookies help provide information on metrics the number of visitors, bounce rate, traffic source, etc.
Advertisement
Advertisement cookies are used to provide visitors with relevant ads and marketing campaigns. These cookies track visitors across websites and collect information to provide customized ads.
Others
Other uncategorized cookies are those that are being analyzed and have not been classified into a category as yet.
SAVE & ACCEPT