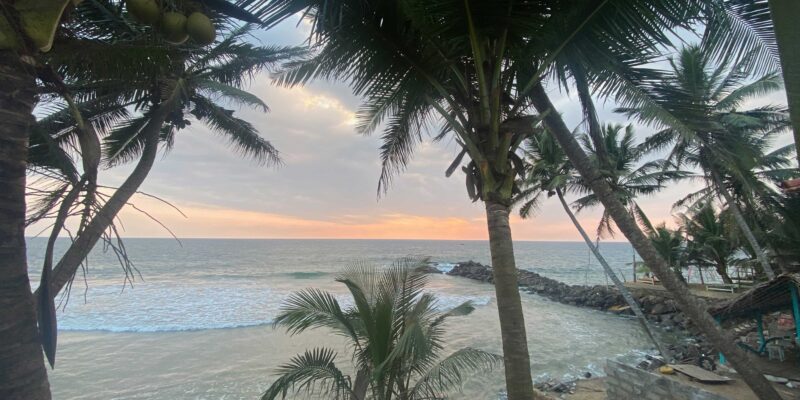 I know I have been absent for much longer than I intended, and I apologize for that. I hope that you’ll find the wait was worth it. I’ve been having adventures, including one in particular that has changed all of my plans. I’d like to tell you all about it, so that’s exaclty what I’m going to do. Tell you all about it. Just not right now. For now I’ll say that my journey so far has taken me more than halfway around the world to a tropical paradise . I am currently in Sri Lanka, in a nice shack right on the beach. However, I am not living the life of a beach bum. I am busy-busy, creating a new podcast to take the place of this blog.

With the podcast, I will tell my stories right to you. More than that, I can entertain and educate you more directly. You’ll get to hear my voice, and maybe even some of the incredible people I’m meeting along the way, as well as hearing the amazing music and exotic sounds of my journey. I have a fantastic professional producer behind me, Ted Cragg of Ted Cragg Podcasting, turning my ramblings into a high-caliber audio extravaganza. It’s taken a bit, but we’ve worked out the technical details and are now busy with production. I’m not entirely sure what the show will sound like when we launch, and I’m sure it will evolve with time, but the voices in my head sound like a cross between a Rick Steves’ travelogue, The Prairie Home Companion, and an Old Time Radio show. Or maybe it will turn out to be something completely different. Either way, we should all have a lot of fun with it.

Thank you all again for your patience.

“You should always have fun, because having fun is the most fun you can have.”

— Jocky Jolly, Fool to Jesters, and Jester to Fools

Welcome to my new travel blog, where I will chronicle my latest rambles around the world.

My name is Epaul and I have been an analog nomad for decades. I’ve traveled all across the US and much of Canada performing & selling at Renaissance Festivals and art shows, and working as a tour guide and long haul trucker, among many other things. This blog is to share with you my journey into my new phase of life, wandering around the world on my own. I will also be sharing my transformation from analog nomad to digital nomad.

During the last 13 years, I traveled as the sidekick to Buster Brown the Supercute Corgi. In that time Buster made it to 43 US states and 4 Canadian provinces, plus the Yukon Territory. He lived a great life and I am beset with grief without him. This Adventure is about my life after Buster, but I suspect he will still intrude from time to time. Buster passed on May 25th, 2021.

Heading back to Wine Country for our pre-game show

After Buster’s passing, I returned to San Francisco to work the summer as a tour guide in Sonoma Valley for Edge of the World Tours. The plan was to make enough money in the 3 or 4 months of the summer season to finance traveling around the world during the rest of the year. It turns out this is a fairly common practice amongst tour guides in San Francisco.

In early September I left San Francisco with 2 suitcases and an ukulin. That’s an instrument I put together myself – a Kala Travel Ukulele that is strung in fifths like a mandolin. I spent a weekend at a summer camp attending a business conference for people who want to live an Independent Lifestyle built on the triangle of freedoms: location freedom, time freedom, and financial freedom. Then it was on to Boston and the true beginning of this Grand Adventure.

At Long Last, the Journey Begins

Long ago I joined the US Navy to see the world. They sent me to San Diego, and Chicago, and Charleston, and Orlando, and said “We’re going to put you in Idaho for the next 6 years.” And so my lifelong Naval Career came to an early end. In the decades since I have worked for/with almost a dozen companies/organizations where being sent overseas was a critical component of my involvement. Plans fell through every single time. I will now admit out loud that I spent the entire journey from San Francisco to Boston working really hard on not believing that something was going to happen to stop this adventure before it even started. Not this time! Just before dawn I landed in Dublin, and for the first time set foot on another continent. I cried when the plane landed. Too many feels.

You Never Forget Your First

After too short a time just transferring planes in Ireland (I’ll be back), I headed for the first stop on my around the world journey: Venice. After making and changing lots of plans (for those who don’t know me yet, that will be a common motif in my adventures), I decided that my first step would be a week in Venice. A city I dreamt of and planned on visiting all my childhood. At some time in the past years I took it off my list on the grounds that it has become so overrun with tourists and cruise ships that it wouldn’t look like the pictures in my head. That has changed in the fall of 2021. My week there was amazing and will be the subject of my next blog post. As part of my current plan to return again to San Francisco and work next season, I have decided that it is now officially a tradition that when I leave Frisco my first stop will always be Venice. It has become my home away from home, and where my heart is. It’s a good thing I can’t afford to just move there right now, or this would end up being a very short travel blog.

We use cookies on our website to give you the most relevant experience by remembering your preferences and repeat visits. Read More By clicking “Accept All”, you consent to the use of ALL the cookies. However, you may visit "Cookie Settings" to provide a controlled consent.
Cookie SettingsAccept All
Manage consent

This website uses cookies to improve your experience while you navigate through the website. Out of these, the cookies that are categorized as necessary are stored on your browser as they are essential for the working of basic functionalities of the website. We also use third-party cookies that help us analyze and understand how you use this website. These cookies will be stored in your browser only with your consent. You also have the option to opt-out of these cookies. But opting out of some of these cookies may affect your browsing experience.
Necessary Always Enabled
Necessary cookies are absolutely essential for the website to function properly. These cookies ensure basic functionalities and security features of the website, anonymously.
Functional
Functional cookies help to perform certain functionalities like sharing the content of the website on social media platforms, collect feedbacks, and other third-party features.
Performance
Performance cookies are used to understand and analyze the key performance indexes of the website which helps in delivering a better user experience for the visitors.
Analytics
Analytical cookies are used to understand how visitors interact with the website. These cookies help provide information on metrics the number of visitors, bounce rate, traffic source, etc.
Advertisement
Advertisement cookies are used to provide visitors with relevant ads and marketing campaigns. These cookies track visitors across websites and collect information to provide customized ads.
Others
Other uncategorized cookies are those that are being analyzed and have not been classified into a category as yet.
SAVE & ACCEPT